skip to main | skip to sidebar

Musings of a Small Mind has moved!

Of Why Runescape is Amazing

People often whine about how ugly Runescape's graphics are and the limited gameplay and poor controls.

Special thanks to the Orb of Oculus for providing my counter argument. 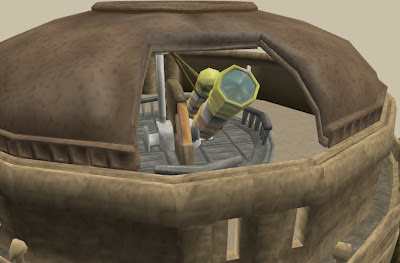 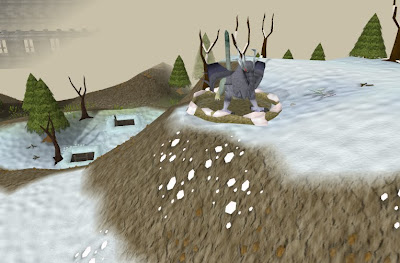 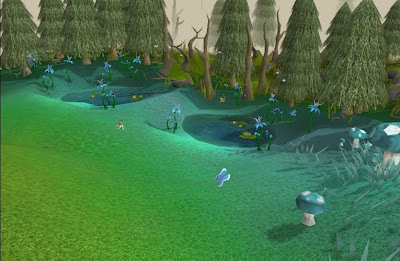 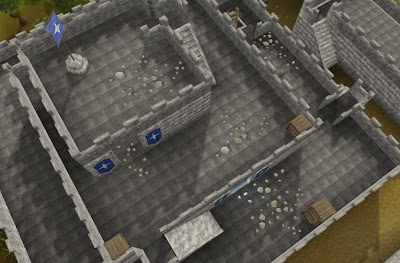 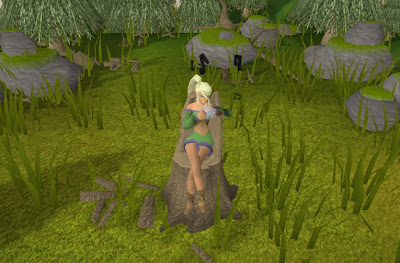 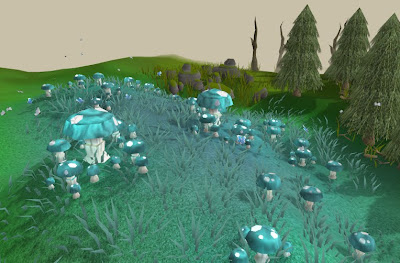 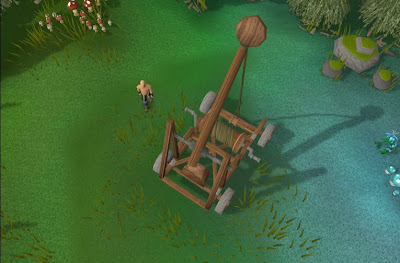 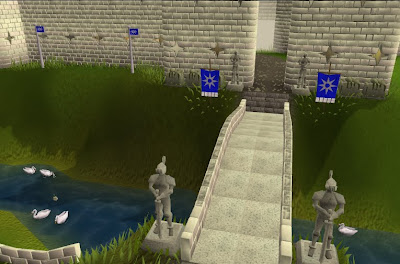 The Sphinx and the Pyramid 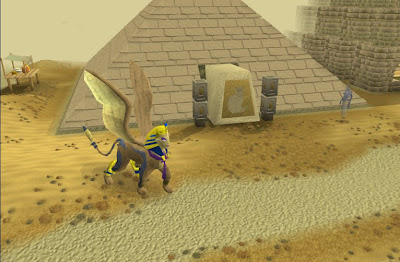 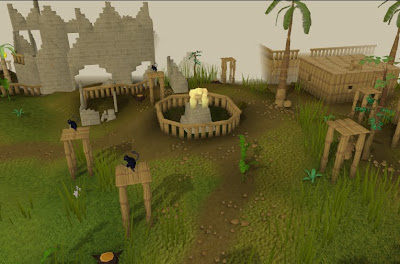 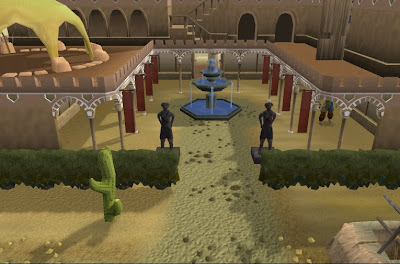 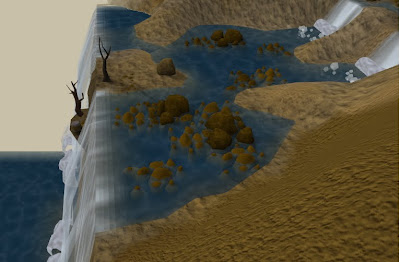 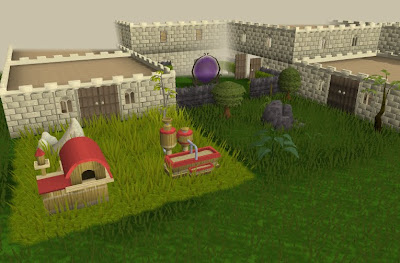 A small orbbe, as thine name wouldde suggestte, it measures approximateley one foot across with a trio of viewing circles. These circles are positioned according to the primary compasse positionnes. All but Southe.

Images are aligned using mirrors held aloft by balloones and propelled by dwarvishe rockettes. Hence the clunky and sudden movement. The image is capturedde by the orbbe fairy who makes its living in the orbbe.

There be two optionnes when deciding on viewe.

The Aimme Modus allows you free movementte in a straight linne, likke the flighte of a avianne.

The world is clearly a flatte plane, constantly expanded by Jag- OW!

Now that we have, as the new agey 'teenes' would say, nailed the basics, we may carrye forthe to thine photographying.

For this manualle, we shalt use the humble towne of Lumbridge. 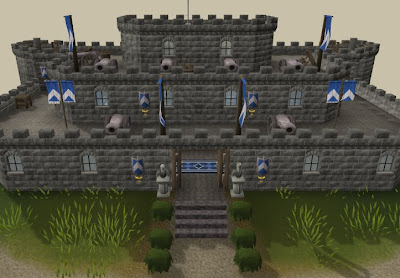 Attempt to centre thine Orbbe's viewe on the invitingge doores.

Centre your buildingge unless there is something suitably impressive to the one sidde that woulde warrante the bias, like an unclaimed Dragonfire Shield or and unclaimed Scantily Clad Meganne Foxxe. 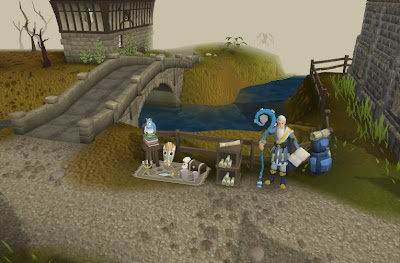 Notice how we the main body is centrered arounde him and his little stande.

For instance, some trees were behind the shotte, that could notte fitte into the shotte and had to be cutte from the shotte. Do not have incomplette objecttes in thine shotte.

The backgroundde here is also of notte. We could not get rid of the gloome and doome in the back so we incorporate it into the shotte, using the stark barren landscappe as a contraste to the brightnesse in of the Guidde. 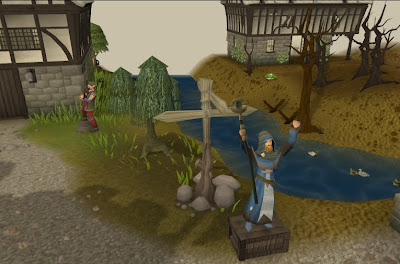 With the maddemanne raising his arms and sticke to preache moare about some or other jabberwockey and the Lute Hero heroing his lute, it capturres the essence of motionne.


Finally, cramming all of the above into a single, tight space! 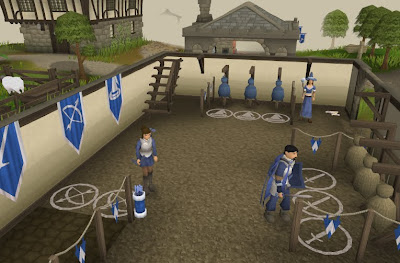 1. Our shotte is centrered.

2. Our subjects are in mottionne.

3. Our backgroundde fitteth the scene.

5. We give a fine glancingge shotte of sheeppe's posterior, for those with such tastes.


Thank you for reading this manualle. This manualle is only a starter on the queste for the perfectte shotte.

You know oweth me 52gp. The council doth no payeth me for myne work. Jerkasses.

I certify that the following blog entry is an original Timothy Gold work, and has in no way been lifted or borrowed from Merch Gwyar's posts on the 8th and 9th of December 2009 or Timothy Gold's posts on the 2nd of January 2009. Any resemblance is purely coincidental.

Anyone who says otherwise will be slapped on the wrist.

Anyone who survives will be glared at. 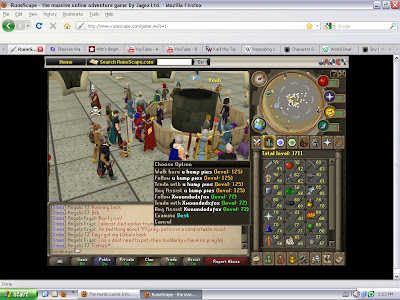 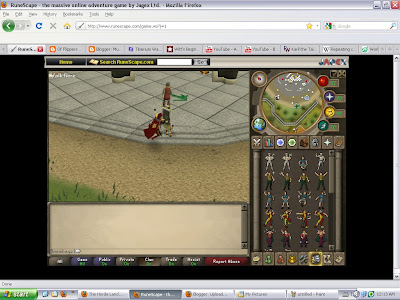 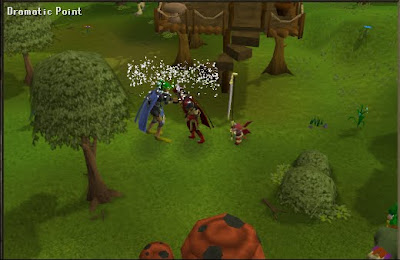 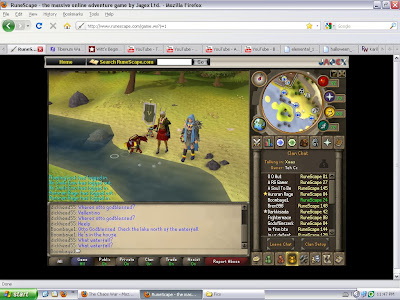 Something something about time taken to do this yadda yadda.
Posted by IVIilitarus at 2:08 PM 2 comments:

Of High Explosives and Electricity

Much of my time previously was spent fishing. Sharks and all, bought a Blessed Spirit Shield to replace the old Dragon Square. Stats on the Spirit Shield are only marginally better but I'm using it as a stepping stone to the faraway Dragonfire Shield.

On a side note, while typing out this post, this happened: 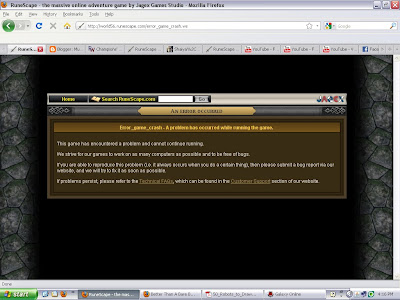 Right afterwards, the patch after the Magic update occured. Odd.

Either way, I bought a Dragon Platebody to help with my goals. 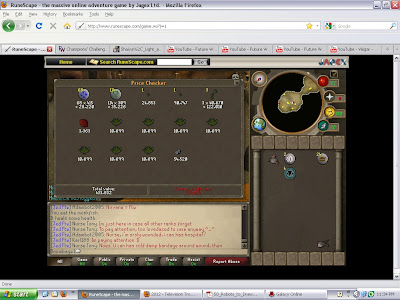 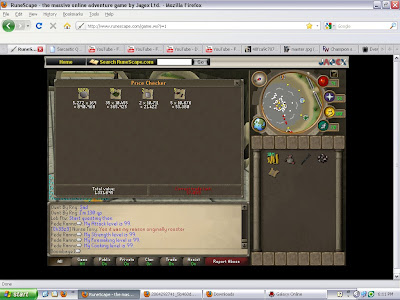 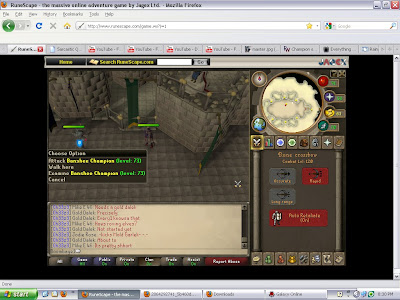 3 down, a dozen champions and 10 scrolls to go. 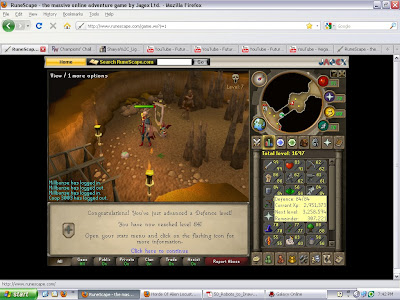 Those goals of pushing certain skills a few levels up into the next tiers?

'stead, I put 3 days into Fishing and drawing. It's a new hobby and fishing + drawing fit together incredibly well. Picked up 83 Fishing today, so there's a consolation for dropping the others.

I also nabbed 70 Magic after a day of Soul Wars. I hate Magic.

I rather liked the rewards from the Ardougne Diary. JaGex is coming to their senses and giving useful rewards in their quests and diaries. I understand the need for balance between usefulness and access to an item but some rewards are just outrageously stupid.

Thankfully, those 3 days of Fishing nabbed me about 3.5 million. I love that green '10M'.

Poked around and found my total wealth to be 49.5 million. A few more sharks and a week of inflation will bump it up to 50. I'll take a save a screenie of it and wait for JaGex to kill 76king and give my money some value once more.

My 99 Attack was a long term goal. For the first 3 months, I'd take maybe 200k worth of time off to train per week. Things stirred up when some friend maxed out her melee and another got 99 Ranged and Fletching at the same time so I began pulling weight out of jealousy.

I have the attention span of a small rodent. I'll detail one of the best training areas for higher level melee in RuneScape, the disadvantages and advantages that come with it and how to do it successfully.

I damn well nearly got my level 99 here. Before this, there were Pest Control products, but those are all but dead. Nowadays, we have Soul Wars products. Soul Wars is a minigame in which you trade your Zeal, the reward for experience, charms and pets.

The main advantage of Soul Wars is how little attention it takes. Perhaps half of your time will be spent in the waiting room. I was able to bring most of 95-99 Attack at Soul Wars. Soul Wars experience ranges from 60k and an hour to 75k an hour excluding experience gained from mass murder perpetrated in the minigame. For me, that may add up to 90k per hour at level 98 Attack with all the killings.

The experience reward changes as you level up, higher levels yield greater experience. From 90 onwards, Soul Wars is a prime method of training. 60k+ per hour with minimum attention is quite good. Anywhere below and there will usually be better places in which to train.

Soul Wars is best utilized at higher levels, unless you're looking for something new.

The main issue with Soul Wars is winning. I can safely say any permanently used world in which Soul Wars is played has all game fixed to win for a specific team. This team is usually a team of level 120+ players who reside in their clan chat. During lategame, a caller, usually the current leader calls out the next team to join. Join the team with the high levels.

They have developed tactics to counter this. Unless the game has just started, you must pay full attention to the waiting room. I'll take the W2lostsouls clan as an example for now. They reside in World 2, almost all games fought against them are lost. The requirements for joining are 125+ combat and 70+ Slayer. Fairly steep.

The main counters used are the rushes. If you're not paying attention, the entire clan may rush at the last minute and charge at the other team, leaving anyone not focused on the losing team. Fake rushes are oft launched, too. All clan members traditionally stand at the far back of the waiting room. When a fake rush is launched, the clan charges toward the door, this drives some people to think it's a real rush and leave the team and run toward the other. 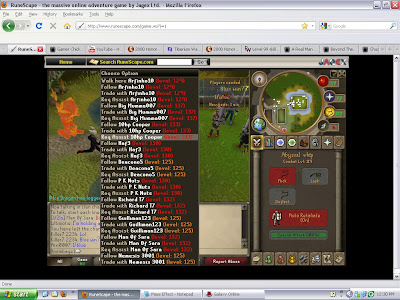 The clan does not exit, sometimes, one or two members will be sent to run at the other waiting room too give the impression that high levels are making a rush. If someone leaves the room, their priority for the game is destroyed and they stand little to know chance of entering a game. If they wind up at the other team, they will be driven to the losing team.

In other cases, the clan may simply form a death dot at the bank and wait at the bank for the game to start, this happens rarely and is easy to spot. Right click in front of the bank chest to search for high levels. Another factor is chaos. Most people who play Soul Wars are savvy enough to join the team with the most as this is where the clan and, presumably, the winning team lies.

If many people are running back and forth and you don't see too many 120+ in the rooms, check the bank. Should something like this occur, wait for the game to start. The clan usually picks the losing team at the start of the game and turns it over.

If the clan pulls off a convincing rush, it's best to watch who's leaving. Sometimes, clan members may send up to 8 members to run to the other team at the time, if executed well, it gives the impression that only one player has left. The pile in front of the door is usually too large in which to find anybody but poke there, too.

Whatever you do, park yourself with the clan. Clan chats are usually open and if you poke around for a few seconds, just follow the purple dots. Be sure to get in and out, you will be kicked if someone sees. Also, when entering a clan chat, do it in front of the door on the side of the waiting room, the large pile makes it harder to locate you.

Once the game starts, you can relax. Players who leave the game are not allowed to rejoin the current game. Stay in the waiting room at all costs. You can expect to join within the first 13 minutes of the game and once you're in, proceed to do as you please and let the big guys do the heavy work.

Rewards from Soul Wars are plentiful and at levels 90+, great for any of the skills available. Hitpoints, Prayer and Magic in particularly good here, you can train Hitpoints at a similar rate to Attack or Strength at high levels with 60k+ per hour. Soul Wars makes Prayer cheap and Magic less tedious.

The main advantage is how little work you need to do. Bring all of your best gear, Barrows is recommended as you may only lose 25% of the status per day at most. You can freeload, though it is discouraged. The activity bar in Soul Wars must stay full and the best way is to heal teammates, each bandage refills half of the bar and this is what most freeloader do. Dying also refills half or more and combat in general provides a steady rise to the bar.

Your main goal in the game is to keep the activity bar filled, once it runs out, you risk getting booted from the game.

Building up zeal is a good idea for the more patient as cashing in 100 zeal gives you 110 zeal worth in experience.

Most importantly, have something else to do while waiting. Reading or listening to music is going to keep the boredom off.


On the other end, I've set a goal to bring all skills at 67+, 77+ and 87+ at least 3 levels. I've already bumped Ranged to 80. Fletching, Firemaking, Magic and Woodcutting are on the way. I have the wallet needed to pull this off quickly enough.

The Bored Runscaper. Be nice or I will kill you.